The Covered Bridge Driving Tour will take you to see the seven covered bridges of Greene County, Pennsylvania in southwestern Pennsylvania. Along the way, you will explore rural charm through town such as Carmichaels and Rogersville, traverse the countryside on dirt and gravel roads, and catch glimpses into the place we call home.

Road Conditions: Paved to country gravel roads on hillsides. Travel at your own risk. 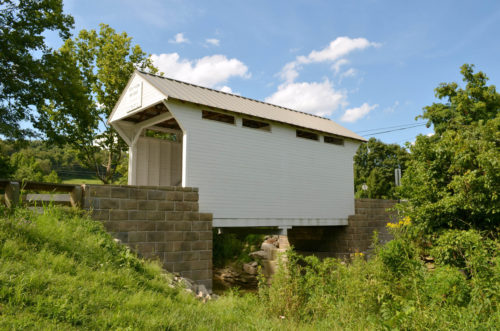 Simply click on the link below and it will guide you to the first destination of the Cox Farm Covered Bridge and then six more covered bridges in Greene County. We do recommend to make two changes to the trip to improve your overall experience.

The Google Maps Driving Tour will sometimes choose the shortest path for you to arrive at the destination. This is not the best route for you to take during the Covered Bridge Tour and we recommend two changes to improve your overall experience.

First Destination: Cox Farm Covered Bridge
The Cox Farm (Lippincott) Covered Bridge with a Kingpost truss design is the shortest covered bridge in Greene County, Pennsylvania. The bridge has horizontal siding, a sheet metal roof, one concrete abutment and one stone and mortar reinforced with concrete abutment. It was constructed in 1943 during World War II with wood due to a shortage of steel. The Cox Farm Covered Bridge was restored in 2013 through grant funding that replaced deteriorated wood and installed five steel beams to carry traffic loads.

On Route to Second Destination

Trip Detour! Lippencott Alpacas
Keeping the family farming tradition alive by growing an alpaca herd into genetically superior white and light colored alpacas. Take a tour of the farm and its operation, get up close to the alpacas and shop in the farm store. Appointments are encouraged. Call 724-852-4084 to schedule your tour today.

Trip Detour! Rices Landing
Rices Landing is located in northeastern Greene County on the western bank of the Monongahela River at the mouth of Pumpkin Run. One of the first visitors to the area was George Washington according to tales. In 1775, while he was traveling to Fort Duquesne, he and his men camped in this area.

Rices Landing was the center of industry during the first and second World Wars with the operation of the W.A. Young and Sons Foundry and Machine Shop. Built in 1900, the shop produced parts for steamboats, coal mines, railroads, and for local businesses. Open on Sunday afternoons for tours, the machine shop is a National Historic Landmark that is a prime example of America’s industrial heritage. Learn more at: Rivers of Steel.

The Greene River Trail provides an up close tour of riverside communities whose histories are steeped in the coal industry. You can see remnants of coal mining along the trail, as well as many of nature’s creatures. The seven mile crushed-stone path runs alongside the Monongahela River and is perfect for walking, jogging and biking.

The bridge was rehabilitated in 1998 and has been a site of the annual Covered Bridge Festival since its inception in 1970.

On Route to Third Destination

In the summer of 1767 a group of men, with their families and slaves, came to this area bringing with them seeds, tools, furniture, livestock and other necessities.  Among these were James Hughes, Thomas Hughes, John Swan, Charles Swan, Henry VanMeter, Jacob VanMeter, John Carmichael and James Carmichael.

Thomas Hughes first settled in the area known as Old Town.  His cabin, which was burned down by Indians,  was located close to where the Pennington Greenhouse later stood.  It is recorded that it was Thomas Hughes who named this location Old Town.

On July 24, 1780, Thomas Hughes sold 360 acres to James Carmichael.  By 1781 James Carmichael had acquired 809 acres of land.   James Carmichael had a vision of a town, which he first called Lisbon.  He began laying out a map that included a town square and lots which would be 50 by 150 feet, with the main road running north and south and called it Market Street, Deeds show that Market Street was also known as Main Street and Morgantown Road.   The main road running east and west through town would be called George Street.

James Carmichael died in 1796 and did not have the opportunity to see his dream of the town come to fulfillment.

A popular place to eat is at the Hartley Inn. Local recommend their pie for dessert, although all the food is delicious!


While a 1990 state survey determined the White Covered Bridge was built in 1900, other sources, including a local resident born in 1911, clearly remember it being built around 1919. White Covered Bridge has vertical tongue-and-groove siding, a gable roof covered with sheet metal and abutments of cut stone and mortar.

On Route to Fourth Destination


The King Covered Bridge is a Queenpost truss built in 1890. With a few boards missing here and there on the sides, this rustic bridge is covered with unpainted random-width vertical board siding. The roof is covered with steel metal and the deck with crosswise planking. The structure of the bridge rests on cut stone abutments, which are extended to form short wingwalls slightly higher than the road level. It has the typical narrow lengthwise opening under the eaves.

The bridge was restored in 2004 and reinforced with five steel beams.

On Route to Fifth Destination


The Shriver Covered Bridge has random-width unpainted vertical board siding on both sides and portals, a gable roof covered with tin and a deck of crosswise planking. The Shriver Covered Bridge is reinforced with six steel I-beams and rests on cut stone abutments that appear to have been laid dry and has wingwalls of similar material that extend a little above the road level.

The bridge was reconstructed in 2013.

On Route to Sixth Destination


The Scott Covered Bridge was built in 1885 by William Lang. The bridge is covered with unpainted vertical boards on both sides and portals, a roof of sheet metal and a deck of crosswise planking. One side window is cut into the center of the Queenpost truss structure in addition to the typical lengthwise openings under the eaves of the bridge.

The Scott Covered Bridge was rebuilt in 2008 and reinforced with six steel I-beams. It rests on cut stone abutments.

On Route to Seventh Destination


The Woods (Neddie Woods) Covered Bridge is the oldest covered bridge that remains standing in Greene County. It was built in 1882 by Lisbon Scott and named for Edward (Ned or Neddie) W. Wood, a Civil War veteran who owned the land on which the bridge was built. Woods Bridge is covered on both sides with unpainted vertical plank siding, a gable roof covered with corrugated sheet metal and abutments of cut stone block.

The structure was rehabilitated in 2005 and reinforced with six steel I-beams.