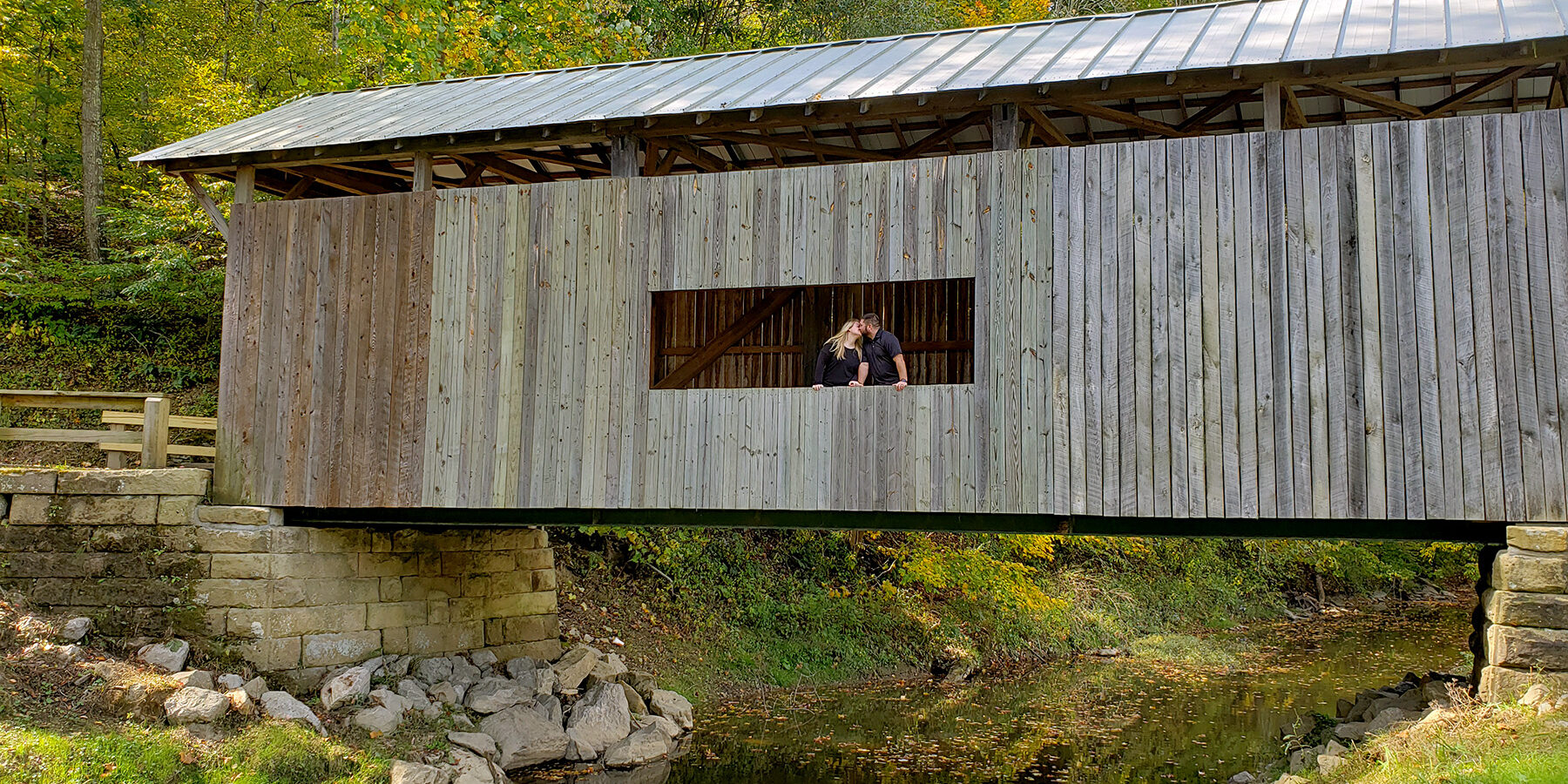 What better way to spend a fall afternoon than on a trademark tour of the seven covered bridges of Greene County.

Steal a kiss, take a selfie and enjoy the drive between these sturdy bits of the past that have survived floods, vandals and time itself to tell the story of 19th century rural America. They can all be driven through – one lane only. Interestingly, it’s the movement of the traffic that gives life to the old wooden beams, stretching them and keeping them supple. Legend has it that kisses have been stolen in them, far from prying eyes.

Four of the seven bridges are unpainted – their sidings replaced with rough-cut boards over the years. Some have been rebuilt. The Shriver Bridge on Hargus Creek near Rogersville was built in 1900, then redone in 2013 with “unevenly planked” siding, a tin covered gable roof, and six steel I-beams to support traffic – mostly tractors, trucks and hay wagons. A close look at its original stone abutments will reveal that the stones are snug and show no signs of mortar.

Take a look around and you’ll know why carloads of covered bridge lovers come here to take picturesque, postcard shots.

Scott Bridge, another lovingly restored landmark, was built in 1885 and sits above a broad stretch of Ten Mile Creek near Rutan. It invites you to drive through and take Covered Bridge Road for a mile, maybe more, just to feel the weight of nature reclaiming steep hillsides that were once cleared pastures.

Neddie Woods Bridge on Oak Forest Road was built in 1882, making it the oldest bridge in the county. Civil War veteran Edward “Neddie” Wood owned the land. Historic preservationists tell us this particular Queenpost truss bridge was built by Lisbon Scott. It too offers a great “Currier and Ives” view of farmland still in production.

King Bridge on Kings Sister Hill Road, Wayne Township, takes you deeper into the hills and returning forests just a few miles from the West Virginia line. Built in 1890 it was restored about a dozen years ago and its 49-foot span can bear a standard three-ton load.

Our last three bridges, each painted a genteel white, capture the feel of what towns and their bridges looked like as the 20th century dawned.

The Cox Farm Bridge straddles Ruff Creek, near Lippincott on State Route 221. When the original bridge was destroyed in 1943, steel was in short supply. Those manning the home front rolled up their sleeves and built a covered bridge. It’s the youngest and also the shortest bridge at 27 feet, and the only bridge with Kingspan design and a partially paneled interior. Refurbished in 2013, it remains a dainty throwback to the days when Lippencott was a toddling town, with, among other things, its own distillery.

Carmichaels Covered Bridge in Old Town Carmichaels, was built in 1889 and is the 19th century touch to the frontier town James Carmichaels helped settle in 1767. White Bridge over Whitley Creek near Garards Fort is an impressive 70 foot structure and is our largest bridge. Hundreds of Covered Bridge Festival goers come the third weekend in September to enjoy the history and festivities these two old bridges bring to life.

All of these bridges are yours to enjoy upon embarking on a road trip in southwestern Pennsylvania. Plan your visit with a self-guided Covered Bridge Driving Tour of Greene County.

Take a Tour to Honor those who have Served
November 7, 2022