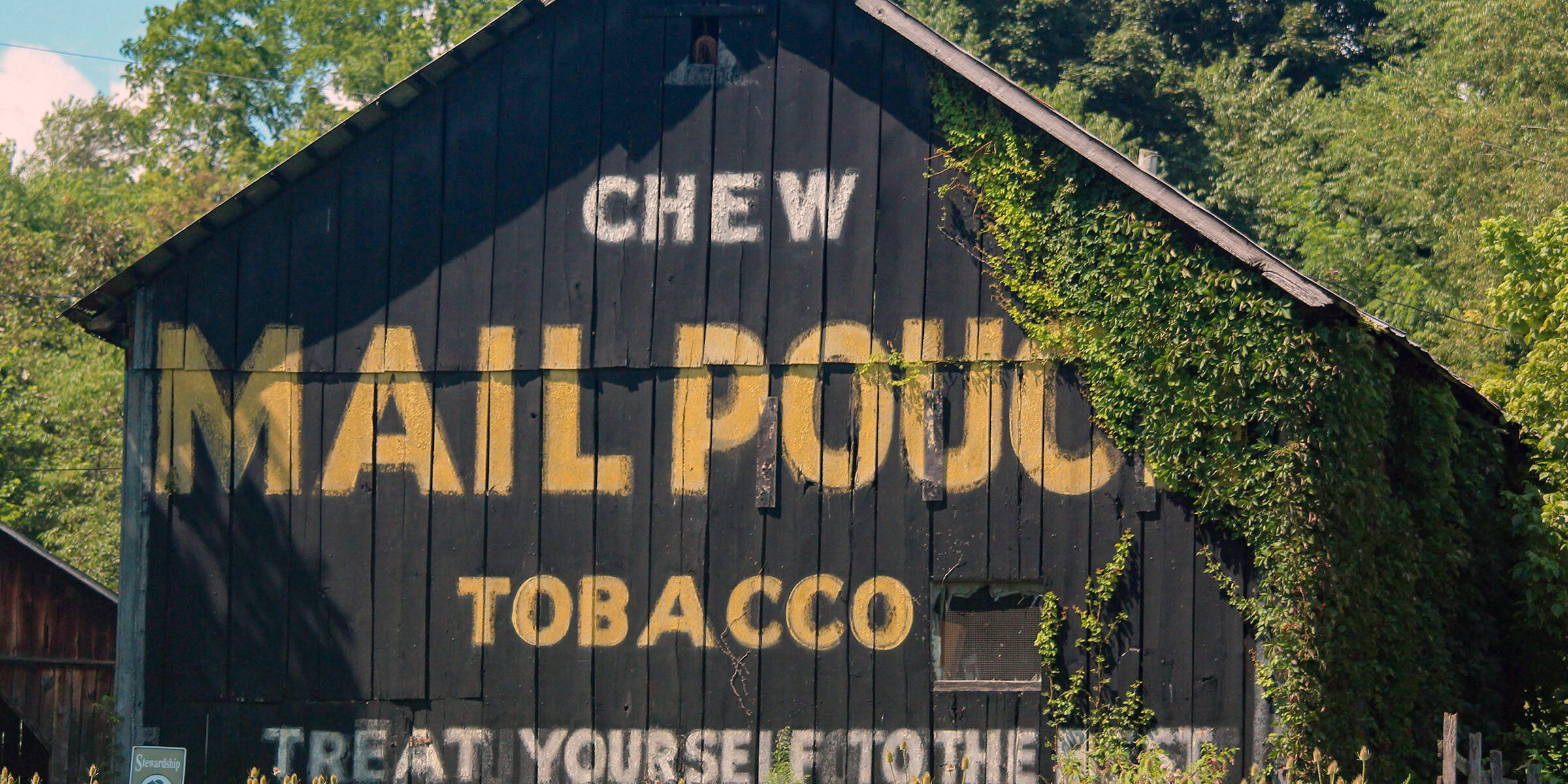 Driving through country roads and farmlands, one can get a clear view of Greene County’s historic heritage through its preserved buildings and landmarks. Rustic barns with the words “Chew Mail Pouch Tobacco” painted across their sides are easy to spot surrounded by the scenic countryside.

Mail Pouch barns are a surviving testament to a new and bold advertising campaign of its time. This unique and somewhat unusual method often featured the same message: “Chew Mail Pouch Tobacco – Treat Yourself to the Best.” The traditional black background with yellow and white painted on the side of barns grew to be a familiar sight in local areas and spread across the country. These Greene County Mail Pouch barns are important both historically and culturally. They continue to be important reminder of the ever evolving methods of advertisement and the ingenuity of salespeople to find a method to sell their product. They also serve as a symbol of an idyllic life where life was simpler and slower. It is not uncommon for people to take an easy drive and see how many Mail Pouch barns they can find.

This advertising campaign was the idea of brothers Aaron and Samuel Bloch of the Bloch Brothers Tobacco Company of Wheeling, West Virginia. At the time there was not any standard for billboards and advertising and as such, the sides of buildings and barns were a popular method of advertising to the public. The Bloch brothers advertisements for Mail Pouch Tobacco began appearing on the side of barns in 1892. The Bloch Brothers Tobacco Company used this method of advertisement for more than a century. Peaking in the 1960’s, the number of Mail Pouch barns rose to approximately 20,000 barns located in 22 states. Compensation was even provided for the farmers who allowed their barns to be painted with free tobacco, cash, or magazine subscriptions. Even when billboards began to pop up across the country, Mail Pouch decided to stick to what they had always done. This was a beneficial move for them as they gained additional barns alongside highways from companies who had switched over to billboard advertisement. At their peak, it is said you could not drive more than ten miles before seeing another Mail Pouch barn. While the majority of the country rapidly progressed towards urban sprawl and new land development, Greene County has remained primarily rural and much of the rural way of life remains to this day.

Harley Warrick, of Belmont, Ohio, and friend of Greene County, is given the credit for much of the painting and touching up of Mail Pouch barns he worked on barns nearly 20,000 times and became the most famous painter associated with Mail Pouch barns. Mr. Warrick began his career painting the barns when he returned home in 1946 from serving in World War II. He joined a crew of barn painters working on his family’s barn on a whim as the idea of working on a dairy farm was much less attractive to him. Warrick found his new occupation enjoyable, but the pay was not great. One barn would take about 6 hours and was painted without the use of stencils. He would start with the “E” in Chew and go from there. They would paint 2 barns a day and made $32.00 a week which was about average in 1946. Not regretting his quick decision, Warrick traveled with his painting crew to various locations, often sleeping in the truck of cheap motels. He recalled that they worked in every kind of weather. Strong gusts of wind would threaten to blow away both painter and ladder. Using ice picks and sticking them into the side of the barn to steady the ladder would prove to be their most valued tool. For the next forty-six years, Warrick continued to hand paint Mail Pouch barns up until his retirement in 1992. You can learn more about Harley Warrick by reading his book The Barn Painter that he wrote with his son, Roger. 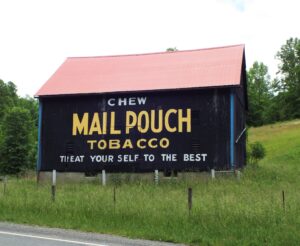 Mail Pouch and other smokeless tobacco products were incredibly popular among coal miners as it helped cut down the dust when they chewed it while at work. Some thrifty users would even chew for a long time and when it became weak they would dry it out and use it in their tobacco pipes. As Greene County had numerous coal mines at one time, Mail Pouch must have been a very popular product. 20,000 Mail Pouch barns were such a common sight no one necessarily noticed them, until 1965 and the Highway Beautification Act, also known as “Lady Bird’s Bill” for the former First Lady, Lady Bird Johnson. It outlawed any kind of signs or advertisement within 600 feet of a highway. This act was meant to protect the natural and scenic beauty along federal-aid highways, Mail Pouch barns were also included in the removal of billboards. Thankfully, in 1974, a West Virginian senator took action and appealed the Beautification Bill and it was amended by Congress to exclude any signs on natural or rustic surfaces from being removed. At one time there had been around 20,000 barns carrying the Mail Pouch insignia, today less than 2,000 remain. The last Mail Pouch barn that had the paint retouched was completed by Warrick in Barkcamp State Park in Belmont, Ohio on October 2, 2000.

In Greene County, there were at least thirty Mail Pouch barns located along the major thoroughfares of Routes 18, 19, 21, and 88. Over time, due to weather and natural decay, only seven remain on private properties. There are Mail Pouch barns still standing in Waynesburg, Mount Morris, Carmichaels, Wind Ridge, and Sugar Grove. We encourage you to keep an eye out for these Mail Pouch barns the next time you are out for a drive. Some are in better shape than others, but knowing that each one was hand-painted by people who valued their work and community makes them even more cherished. Through the entrepreneurial spirits of the two Bloch brothers, these Mail Pouch barns have added to the heritage and landscapes of communities all across the country.

Take a Tour to Honor those who have Served
November 7, 2022